In 2019, following almost four years of world-wide touring a new, revised edit of Koudelka Shooting Holy Land was completed, thanks to a successful crowd funding campaign aiming to make the film accessible for larger audiences.

In 2020, the revised version was released on DVD and Blu-ray and online via the VOD platform, Vimeo On Demand.

Alongside the film’s revised version, the Disc Edition includes over 60 minutes of never before seen video material — in-depth conversations between Baram and Koudelka on various stations in the photographer’s life-long career, edit-room-floor scenes from the original film and a Q&A with Koudelka and Baram filmed in front of a live audience in the photographer’s native city of Prague.

Now 82-year-old, Koudelka has always kept out of the public eye and has led a secluded lifestyle, dedicating himself to photography in the most absolute way possible. Koudelka Shooting Holy Land -The Disc Edition presents a unique insight into the creative process of one of photography’s greatest living masters and stands as the most comprehensive visual documentation of Koudelka to date. 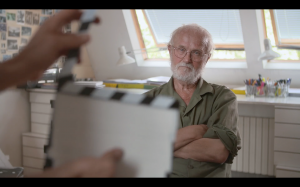